If you have ever worked on a team that built distributed systems, you have probably faced a situation where customers were complaining about errors in the system and you had to spend hours just to find out where the error was coming from.

Let's take a look at a sample architecture using diagrams.net: 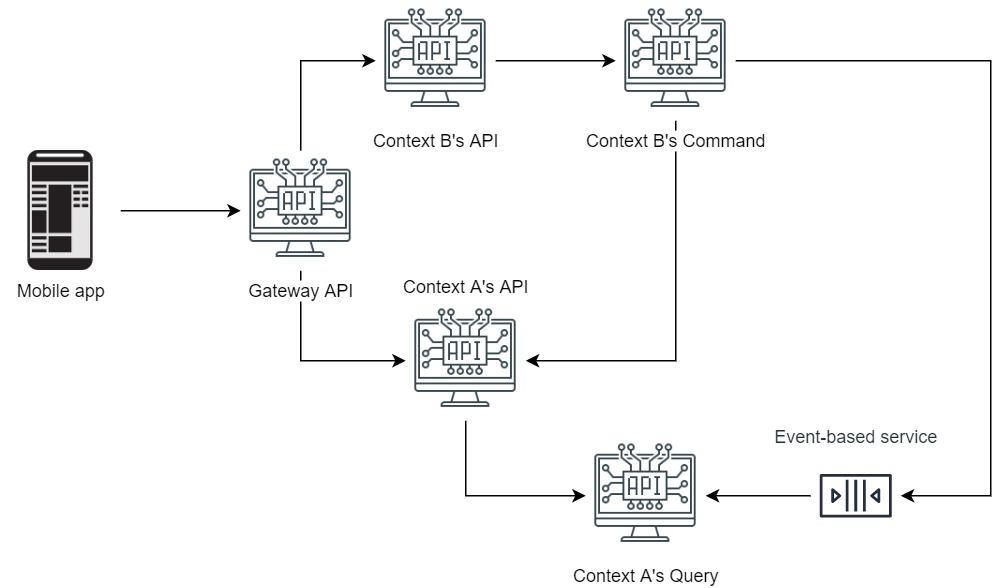 So, let's say we have a problem in Context A's query:

Well, unless you have separate endpoints for each service, and are potentially duplicating code just for this purpose, you most likely don't have a simple way of determining where the request originated from.

Common ways to solve these issues

Using Correlation IDs
You could, for example, be using something like a Correlation ID to keep track of the request since it started through all the services. But, if that's the case and you have ensured that the same id is passed always, do you have a service such as ElasticSearch with Kibana to easily search for that Correlation ID without wasting several minutes switching between applications and search queries?

In my experience, either:

Using OpenTelemetry
A new standard for taking care of situations like this, is OpenTelemetry, which has an official .NET library. The main idea is not entirely different to having a Correlation ID, but instead having a TraceId and a SpanId, where the TraceId represents the ID of the request and SpanId represents the ID of a specific unit of work in the system.
While the above sounds really nice, it's pretty much useless unless you have the proper infrastructure to produce and consume the logs, as well as the necessary system that analyses the traces and spans to build the request tree, such as through flame graphs.
In my experience:

While working at a previous company, I realized that the above approaches share common problems:

Notice: the solution implemented throughout the rest of this post is supposed to extend any solution you might already have (like the ones above), rather than replace them.

Giving more context to our scenario

In order for this to make sense, we need to come up with an actual scenario. For this example, I'll be using an industry-agnostic order system based on a simple CQRS implementation:

Note: the above architecture might not be correct for some people, the idea is, however, not to design a perfect architecture but to have a context for our scenario.

So, what we have is:

For this simple scenario, imagine that all communication is done through HTTP except for the Order Processor, which is a Lambda (AWS)/Function (Azure) triggered by an event sent by Order Command.

In order to keep this short, let's think we have only the following operations:

Let's assume that Customer Query's Get Costumer endpoint is accessed in all three operations (to retrieve a customer, to validate a customer when creating an order, and to get the customer's address, respectively).

Now that we have our context and operations, we can see that Customer Query's GetCostumer endpoint can be problematic. Imagine that we have this log:

Ok, someone submitted an invalid customer name. But which application, and why? In other words, at which point of which operation did we get an invalid costumer name? Were we supposed to receive that call or was it due to a bug?

The solution I found, together with a very good friend and member of my team, was to use 2 new headers in all calls throughout our system, independent of the method of communication:

What if another domain needed to consume, for example, the operation for creating an order? That could look like this:

With the above examples, I hope it's clear that:

So, here's what we achieve with the above solution:

Now that we have an idea of what we want to do, we need to implement it in such a way that it's easy to determine if a given service is correctly following the solution or not. For this reason, I recommend to abstract away all the logic in a separate, reusable library.

Note: the final solution implemented here can be found in my GitHub Blog repository.

There are 3 main points that we need to take care of for this solution:

The easiest way to do this is to create an extension method that adds the headers to the HTTP calls for a given microservice.

You could then use the extension method above instead of calling the usual AddHttpClient method. Notice that I used one overload which provides some flexibility with the clientConfiguration parameter, but it should be quite straightforward to extend the solution above to support other AddHttpClient overloads.

The Activity class used above comes from the System.Diagnostics namespace. The documentation is a great starting point for learning about it, but basically what we're doing is to get an item from the current Activity, which is started by ASP.NET Core automatically. We'll be adding that item to the Activity next.

Now that we can send the headers, we need to read them as well. The easiest way to have this for all endpoints is by using a middleware, which, if placed accordingly in the pipeline, will not be run for static files, among others.
There's one tricky bit, however. We need to not only read request headers for requests that have them (for example, in Order Command), but we also need a way to have the data available when we don't have the headers (in our entry points, like the Gateway API).

For this example, I decided to use a single class to handle both scenarios. For production scenarios, it might make more sense to split them out into 2 classes.

There are 2 main methods for the middleware above, let's review them:

HandleServiceAsEntryPoint:
This method contains the necessary logic for the application acting as an entry point, like the Gateway API. The most important part in this method is obtaining the correct Operation ID, which can be tricky.
A nice way to achieve this is to use Attributes on Controller actions and then building a list of these at application start up to then be able to reference fast.

HandleServiceAsDependency:
This is the opposite case, where we know that the caller should have sent the headers containing the Operation ID and Client Name.
In the sample above, I decided to return Bad Request if the caller did not include the headers, which can be too strict depending on your requirements. If the logic for determining the entry point is correctly done, it might make more sense to fall back to the default Operation ID and/or Client Name, and perhaps log a warning indicating the bad usage.

The way I prefer to do this is by adding the data as log scopes. If you use a good logger like Serilog, the way the scopes are logged make it very easy for tools like ElasticSearch to index, which can drastically help searching for this data when needed.
Fortunately, doing this is the easiest part of all, since we already have the data.

For example, we can do just:

Since our middleware runs before the endpoint (Controller, for example), this ensures that the data is appended to all logs, and we don't have to worry about it being duplicated or missing.

With the simple code above, we have a good part of our implementation done. There are some other pieces that are needed to make it nice and clean, but the most important parts are there to modify and extend as needed.

Here's a sample output of Customer Query after running the code above:

Remember that you can find the sample code ready to run on my GitHub repository.

I focused on ASP.NET Core services in this post to keep it short and simple, as well as generic. However, keep in mind that:

I hope you have enjoyed this rather lengthy post, and I really hope you find it useful. As always, please feel free to reach out in comments.